PICK A TAG IN THE CLOUD 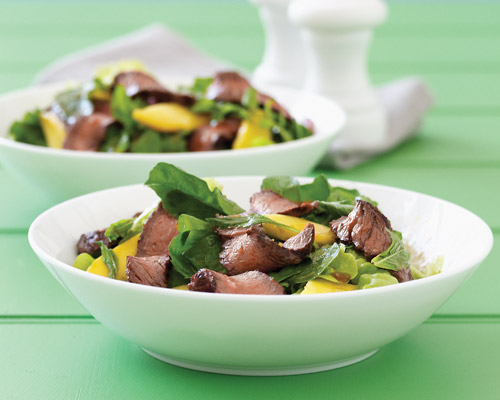 1. Brush the steaks lightly with oil. Season with salt and pepper. Preheat the barbecue flat-plate or char-grill plate or pan to hot before adding the steaks.
2. Cook on one side until the first sign of moisture appears. Turn steaks once only. Test the steaks for degree of doneness with tongs. Rare is soft, medium feels springy and well done is very firm.
3. Remove steaks from heat loosely cover with foil and rest steaks for 5 minutes before serving. While the steaks rest, toss the remaining ingredients together. Slice the steaks thinly and mix with the salad ingredients.

Tips:
Thickly cut rump, rib eye/scotch fillet or sirloin/porterhouse/New York steaks work best for beef salads like this one.
Preheat the char-grill pan to hot before adding the meat. Instead of oiling the pan it is better to oil the meat. Either brush it lightly or rub a little oil into the meat.
Best beef cuts for char-grilling: fillet/tenderloin, rib eye/scotch fillet, sirloin/porterhouse/New York, T-bone, rump, round and blade, oyster blade.